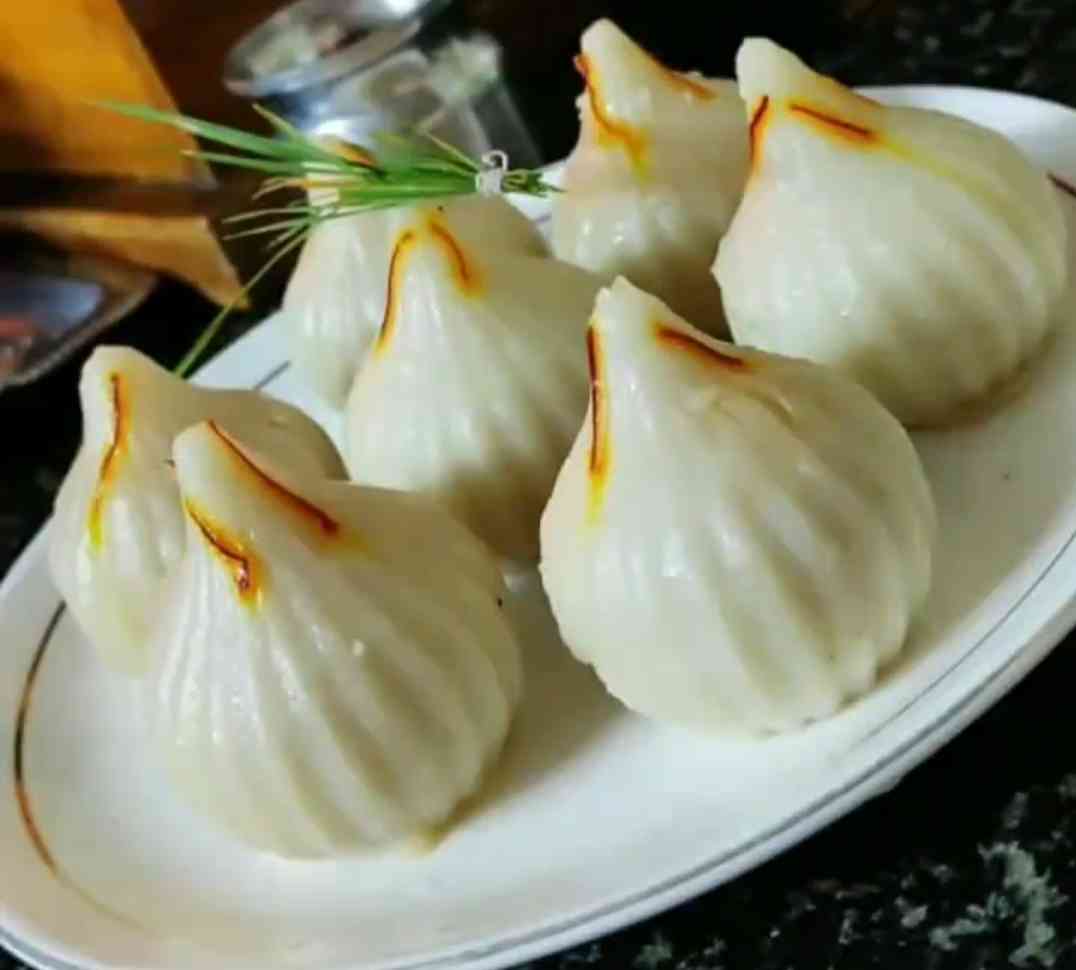 Modak is a sweet dish, made in Maharastra. Modak is mostly prepared for Lord Ganesh during its festival. It is made using rice flour or wheat flour mixed with the stuffing consists of grated coconut and sugar/ jaggery, some handful of dry fruits. The Maharastran people frequently make Steam Modak also called Ukadiche Modak.

1.  For making Modak firstly we have to knead the rice flour, for that heat water in a vessel.

2. Then add salt to taste and ghee in the water, let the water comes to boil, then switch off the flame.

3. And add the rice flour to the boiling water, mix it then cover the lead and let it rest for 5 minutes.

Meanwhile, we will prepare the stuffing of the Modak.

6. Then chop the cashew and raisins in small pieces and add into the jaggery and coconut mixture.

7. Also, add the roasted poppy seeds, mix it well and combine it all together, turn off the flame.

8. Then add the powder/ crushed green cardamom, now let the mixture cool down.

Till then we will knead the dough of rice flour which we have kept for resting.

9. When you are done with the dough, then take a small amount of dough on your hands and make a round ball, flatten it with your palm and fingers.

10. Keep corners thin and thick from the center, dig for filling the stuffing, now add 1 tablespoon of stuffing in the center.

11. Now give it a shape of flour, and seal it from all the sides.

12. Modak is ready, place it on a plate, make more Modak like this.

13. For the same Take a vessel in we can steam the Modak, so take a vessel, add 2 cups of water in it, let the water comes to boil.

14. When the water will boil we will steam our Modak init,  place a sieve on top, firstly grease the sieve with some ghee or oil.

15. Then arrange/ place all the Modak’s on the sieve, now cover the lead, and let it cook for 10 minutes.

16 After 10 minutes transfer the Modak to a plate and serve it.

Note:- instead of jaggery you can also use sugar (if you use sugar then increase the quantity of sugar to make the Modak sweet). 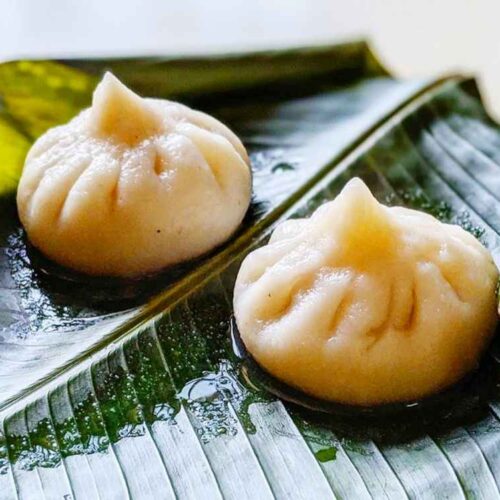 Keyword How to make Modak

We will start by making the stuffing of the Modak.

1.  Heat a pan, then add grated coconut, then add sugar half quality of coconut (you can increase the quantity of sugar if you like more sweet).

2. Then add fresh cream, (instead of fresh cream you can also use khoya if you wish) mix this well.

3. Now add chopped cashew nuts and almonds, then add a little bit of cardamom powder, mix it well and let it cook for some time.

Till then we will do our future preparation.

4. For that heat a pan, add ghee to it, let the ghee melt. Now take wheat flour in a bowl, in that add all-purpose flour, salt to taste.

5. Then add the ghee which we have kept for melting, mix this with the help of a spoon, then add a little bit of water and knead the dough nicely.

7. Till the oil gets heat we will roll some Puris, make small balls of that dough, roll out Puri from the small ball.

8. Put 1 spoon of coconut and sugar mixture which we have already made, so put 1 spoon of that in the center of the puri.

9. Now make pleats or flower of puri, join the ends of puri and give it a shape, now one by one add/place this Modak into the pan of hot oil.

when the Modaks are fried properly, then drain the oil from it and transfer to a plate.

our fried Modak is ready. 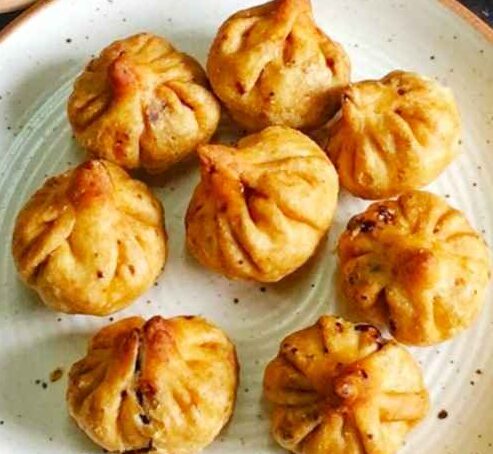 Firstly we have to melt our chocolate with a double boiler method.

1.  For that, we will take a vessel, add water in it, now we will place one more blow in the vessel, make sure the blow should not touch the water.

2. Now chop the chocolate evenly so that it will melt quickly, then we will add this chopped chocolate into the bowl.

Till then we will make our filling/ stuffing.

4. For the same we will take freshly grated coconut, then add chopped almonds and cashew nuts.

5. Then add condensed milk and combine the mixture properly.

6. So now in the mould, we will add some melted chocolate.

7. Then add little coconut filling/stuffing, (you can also add some Nutella)tap the mould.

8. Again we will add some melted chocolate, and tap it and keep in the fridge for at least 10 minutes.

9. After 10 minutes remove the Modak from the fridge and demold it, and place it on a plate.

So our simple chocolate Modak is ready. 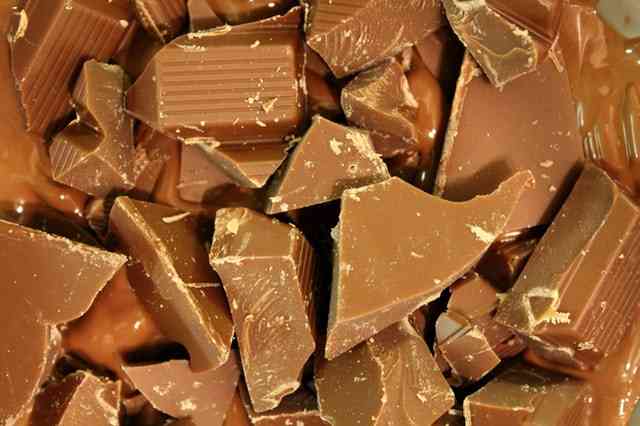 1.  Take a big vessel, add milk in it, keep the milk for boiling (we have to cuddle the milk).

2. So for that as soon as the milk will boil switch off the flame, and let the milk cool down when the milk gets cool then add lemon juice to it.

(don’t add lemon juice in hot milk, if you do so the cuddle milk will be stiff)

4. Now strain the curdled milk. after straining it, make sure you wash the curdled milk properly, or else the Modak will get the lemon taste which can spoil the taste of our Modak.

5. Drain the water, now take out it on a plate, then try to smash it by your palm, you want you can also blend it once.

6. Now add sugar powder in it, mix it well, and try to make a nice dough.

7. Take a Pan put that dough into the pan, keep the flame low and cook for 5 minutes, stir it continuously, don’t overcook.

8. Then transfer it to the same plate, now add Kesar milk in it, the milk quantity depends on how much you have cooked the dough.

9. Mix it well and again try to smash it by your palm, and try to again make the dough.

10. Now we will make Modak out of the dough, so we will take a mould, put some Modak dough inside it.

2. Then add milk powder, combine it well, there should not be any lumps, keep on stirring constantly on low flame, after 10 minutes you can see it’s getting thick.

3. Keep on cooking until it combines all together like a dough, transfer to a bowl and let it slightly cool.

4. Then, add powdered sugar, then add cardamom powder, mix it well and try to form a soft dough.

5. Now take a Modak mould, grease it with some ghee.

6. Make small size ball and stuff into the mould, you can also stuff dry fruits in it then close the mould and remove the excess dough from the mould.

7. Then open the mould slowly.

The recipe is ready.

2. Then add besan, cook the besan until it changes its colour, stir it continuously.

4. Then we will add cardamom powder, mix it. And let it cool down.

5. Once the mixture is cooled down, then we will add sugar powder.

6. Mix it, smash the mixture with your hands and try to form a dough.

7. Then we will take a Modak mould, grease the mould with ghee.

8. Now make small balls of the dough and stuff in the mould.

9. Then close the mould and remove the excess Besan dough, then slowly open the mould.

And you can see our recipe is ready. 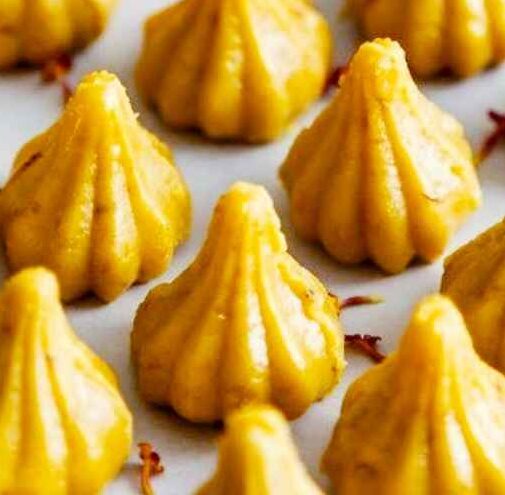